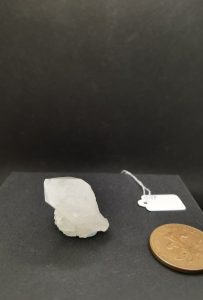 Categories: Crystals(View All), Special Clear Quartz Points
Size: 3.5x2cm
Weight: 9g
Structure: Twin, masculine
Twin: Twin crystals are a formation where two points grow alongside each other in parallel. They are useful for partnerships, streamlining energy or decisions or in aligning areas which feel chaotic or unstructured. They are often used for love rituals and for creating positive loving relationships