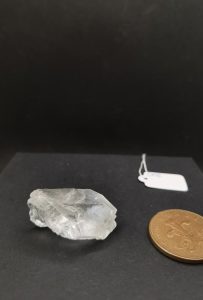 Categories: Crystals(View All), Special Clear Quartz Points
Size: 3.5×1.5cm
Weight: 8g
Structure: Elestial, window, isis
Cathedral / Elestial Crystals: This growth structure is where there are a number of parallel crystals of all shapes and sizes growing up and attacked to one main central point all in the same direction. These generate, amplify and magnify energies – they are said to help us access the akashic records and our own hidden knowledge. So excellent for finding our soul purpose and life fulfilment.
Window Crystals: When you have a perfect 4 sided diamond shaped face whether small or large, these are classed as windows. They generate balance, harmony and integration with the self. They can act as mirrors in spells or rituals and as protection for our homes reflecting back negativity directed at us

Isis Crystal: A five sided (polygon) face with a flat base line then paired lines outward and back inward in a long point at the top represents an Isis crystal. Named for the Egyptian Goddess, they represent pure feminine energy for harmony, healing, fertility and birth in all its forms. They are also used for legal matters as they represent truth an balance. They are excellent for people suffering from depression or anxiety and generate a sense of wellbeing.