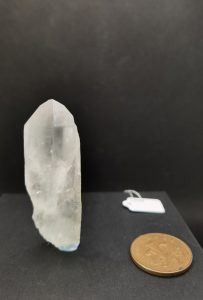 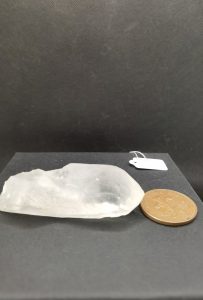 Size: 6.5x2cm
Weight: 29g
Structure: Twin made up of standard and tabulated points, window, ancestral, rainbows
Tabulated Quartz: these crystals have a flattened or squared off shape. They hold or block energy and ground excess energy fields
Window Crystals: When you have a perfect 4 sided diamond shaped face whether small or large, these are classed as windows. They generate balance, harmony and integration with the self. They can act as mirrors in spells or rituals and as protection for our homes reflecting back negativity directed at us
Ancestral Crystals (also known as BarCode): Where a crystal has “stretch marks” or barcode lines parallel to each other in the direction of growth along the main body of a crystal there are said to contain encoded wisdom and knowledge. They are said to be excellent for holding crystal programming better than smooth faced ones and so are often used for long term crystal grids of patterns or for sending to friends/clients for a healing purpose.
Rainbow Crystals: Where a natural flaw or fissure occurs as a small crack within the crystal it reflects and refraction occurs splitting light into all the colours of the rainbow. They are used for representing spiritual guardians and guides and for the inner potential to heal and overcome adversity as even damage creates beauty and strength.