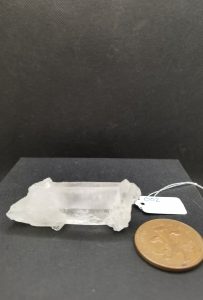 Size: 5.3x2cm
Weight: 13g
Structure: Self healed, Mother & imbedded child, bridge, half masculine, half feminine
Self Healed Crystals: A self healed crystal is where a point has broken when growing but then sealed or repaired itself so that the shape and structure are still held together as one piece. They are used to represent the overcoming of obstacles, redirection, rebirthing and overcoming pain. They are excellent for addiction, grief, loss and rejection.
Mother & Child: a mother and child structure is where there is a large points with a smaller one parallel and growing attached to it – some have two or three child crystals linked. They are often used for energising family environments and minimising family arguments so excellent for placing in the lounge, They can also be used in the bedroom as fertility enhancers
Bridge Crystals: These are a large crystal with a smaller one attached or partially inserted but lying across it rather than in parallel or coming out from the main structure. These crystals are used to clear lies and deceit, they are used to slow or disrupt pathways and energy flows which need to be stopped or redirected.